England to face either Germany or France in Euro final 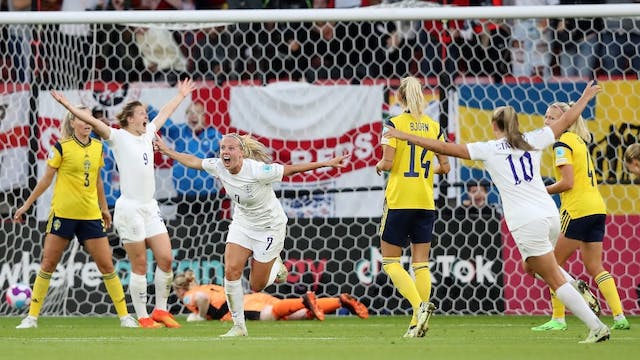 The GIST: One semifinal down, one to go. After England wowed the record-setting 28,624-person (!!!) home crowd with yesterday’s 4–0 win over Sweden, today’s semi decides whether Germany or France will join the hosts in Sunday’s final at iconic Wembley Stadium. Jolly good!

England vs. Sweden: Football really could be coming home following the Lionesses’ dominant win over powerhouse Sweden, the No. 2 team in the world. Beth Mead started the scoring party in the 34th minute before the floodgates opened in the second half with goals from Lucy Bronze, Alessia Russo and Fran Kirby. Sheesh.

Germany vs. France: These two international powerhouses square off today at 3 p.m. ET (ESPN2/ESPN app in the U.S., UEFA.TV in Canada). Germany has yet to allow a goal all tourney and posted the more decisive quarter-final win — a 2–0 victory over Austria.