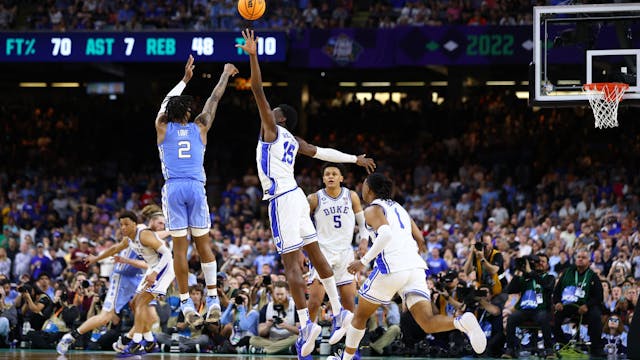 The GIST: All of the madness will end after tonight’s 9:20 p.m. ET game when No. 1 Kansas and No. 8 UNC battle for the men’s national championship. Miss you already, college basketball.

Final Four recap: Saturday’s first semifinal was a snoozefest, as Kansas routed No. 2 Villanova 81–65, but the nightcap brought the drama. UNC guard Caleb Love etched himself into Tar Heels’ lore when he hit a crucial three-pointer to help lift UNC to an 81–77 upset win over archrival No. 2 Duke.

Tonight’s championship: These squads are no strangers to success: Kansas already has three program titles while UNC boasts six.

Players to watch: For Kansas, it’s Ochai Agbaji. The Big 12 Player of the Year netted 21 points in the Jayhawks’ semifinal tilt, boosting his stock ahead of June’s NBA draft.