June 04, 2020
While athletes’ voices are powerful on their own, backing from teams and strong action taken throughout organizations are imperative if we want to see real and necessary change driven by sports.
Sports NewsFootballSoccerGeneral 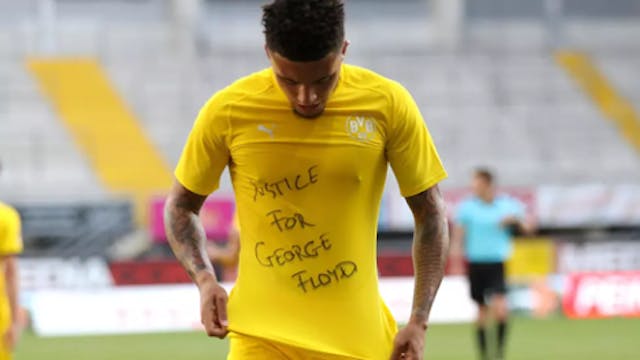 The GIST: While athletes’ voices are powerful on their own, backing from teams and strong action taken throughout organizations are imperative if we want to see real and necessary change driven by sports.

What soccer is doing: Germany’s Bundesliga, one of the only major leagues currently playing, saw four players publicly show their support during matches last weekend. One of the players, Borussia Dortmund star Jadon Sancho, received a yellow card after taking off his jersey (a no-no) to reveal a handwritten “Justice for George Floyd” message on his undershirt.

How the NCAA is helping: Kevin Warren, the commissioner of the Big Ten Conference (the oldest Division I sports conference in the NCAA) has created the Big Ten Conference Anti-Hate and Anti-Racism Coalition. The coalition will partner with existing diversity councils on school campuses in an effort to empower and educate students.

The Philly Special: While many (not all) NFL teams have made official statements regarding the Black Lives Matter movement, the Philadelphia Eagles took it a step further: Eagles chairman and CEO Jeffrey Lurie, who rarely participates in team meetings, joined a closed meeting with players and coaches for a discussion on race relations.