November 27, 2022
Native American mascots in sports and the work being done to eliminate these harmful stereotypes.
Sports News 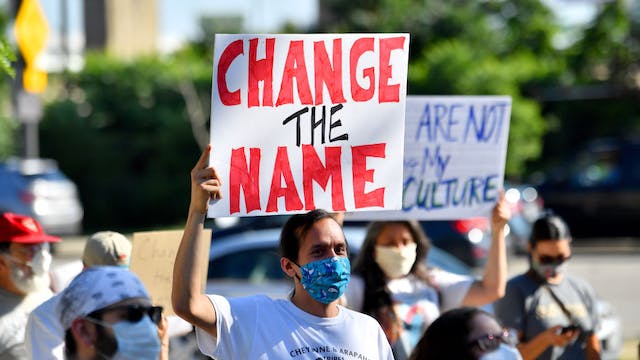 The beginning of the movement to remove harmful “Indian” mascots can be traced back to the 1968 National Congress of American Indians (NCAI) campaign to address stereotypes found in pop culture and media, including sports mascots.

And while many opposed to removing Indigenous mascots say that they “honor Native Americans” or aren’t inherently harmful, countless studies have shown the real psychological damage these stereotypes cause for Indigenous and non-Indigenous people alike.

It’s not just a game, or just a chant, or just a character — these mascots cause real-life, lasting damage, and it’s well past time for change.

A recent high-profile example of these harmful stereotypes was on stark display at the 2021 World Series. When Atlanta’s MLB team (whose stadium is on Cherokee land) plays at home, it’s impossible to watch a game without hearing and seeing fans doing a racist gesture called “The Chop.”

And while Atlanta competing on the national stage was an opportunity to enact change, MLB commissioner Rob Manfred instead brushed aside the conversation, claiming that “the Native American community in that region is wholly supportive of the Braves program, including the chop.” Umm, what?

As for Atlanta’s racist nickname, which the team adopted in 1912 (and again in 1941), plenty of non-offensive changes have been floated. The “Hammers” in honor of late Atlanta baseball legend Hammerin’ Hank Aaron sounds better to us.

While the work continues, we can also celebrate successful moments of progress. The most notable team name change came from the aforementioned Washington Commanders, but this welcomed removal didn’t come without significant conflict.

Other recent notable changes in the pros include the MLB’s Cleveland Guardians, who just wrapped up their first season under their new name, and the CFL’s Edmonton Elks, who dropped their old nickname in 2020 and adopted the Elks in June 2021.

The pro teams we discussed earlier receive most of the attention and scrutiny, but harmful and stereotypical mascots are pervasive throughout the sports world, including in the minor leagues and even at the K-12 level.

The good news? Bills to ban Indigenous mascots in public schools have been introduced in a handful of states, and the issue is gaining traction.