Everything you need to know about MLS Cup Playoffs

October 15, 2022
The MLS Cup Playoffs are here, and so are we! It’s time to dive into this year’s postseason fun, which will serve as the perfect appetizer ahead of November’s men’s FIFA World Cup.
Sports NewsSoccer 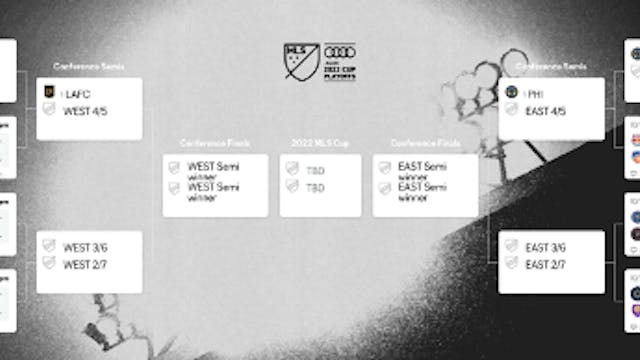 Teams will participate in four rounds of win-or-go-home matches, with the top teams in each conference enjoying a first-round bye. Winners in the first round will head to the conference semis, hoping to progress to the conference final and then to the big dance — the MLS Cup final on November 5th.

➡️ The teams: Beasts in the East

No. 3 New York City FC: The reigning MLS champs come into the postseason without two important figures from last year’s championship run — head coach Ronny Deila and 2021 Golden Boot winner Taty Castellanos. The team hasn’t quite recovered from their midseason departures yet, though goalkeeper Sean Johnson remains reliable as ever with 14 shutouts in 2022.

No. 4 New York Red Bulls: Despite an inconsistent season, the Red Bulls hold the league’s longest playoff streak, making their lucky number 13th straight appearance this year. Midfielder Lewis Morgan leads the young team in the attack with 14 goals, while 20-year-old John Tolkin is a fan favorite in defense. The kids are alright.

No. 5 FC Cincinnati: Cincy booked its first-ever playoff berth thanks to impressive seasons from offensive talent. Midfielder Lucho Acosta led the league in assists with 19, while forwards Brandon Vazquez and Brenner scored 18 goals each in 2022.

No. 6 Inter Miami CF: The team’s playoff run will serve as a swan song for aforementioned Argentine legend Gonzalo Híguain, who will hang up his boots at the end of the season. He closed out his final regular season in stellar form with 16 goals, while midfielder Gregore is once again the team’s backbone after winning Miami’s MVP award in 2021.

No. 7 Orlando City SC: After an inconsistent year, the U.S. Open Cup winners snuck into the MLS Cup playoffs on the final day of the regular season. Orlando’s successful days usually coincide with Facundo Torres’ — the forward scored nine goals and notched 10 assists during the regular season.

⬅️ The teams: Best of the West

No. 3 FC Dallas: Also representing Texas? Dallas, who are back in the postseason after missing out on last year’s fun. The team’s main MVP candidate is forward Jesús Ferreira — a contender for the USMNT’s World Cup squad — after he scored 18 goals this regular season.

No. 4 LA Galaxy: One of MLS’ best teams returns to the postseason this year thanks in large part to a stellar display from Javier “Chicharito” Hernández. The forward received the attack-minded Western Conference memo and scored 18 goals during the regular season, while midfielder Riqui Puig has settled in nicely since arriving from FC Barcelona in August.

No. 5 Nashville SC: The Music City team enters the playoffs with MLS’ top goalscorer Hany Mukhtar, who picked up this year’s Golden Boot after scoring a whopping 23 goals. Sean Davis played a crucial role in midfield during his first year with the club, while USMNT player Walker Zimmerman stayed consistent on defense.

No. 6 Minnesota United FC: The Loons snapped a six-match winless streak on the final day of the regular season, and will hope that’s just the start of a deep playoff run. The team will need midfielder Emanuel Reynoso to be at his best after he became MLS’ first player to record double digit goals, assists and yellow cards. A triple threat.

No. 7 Real Salt Lake: Like Minnesota, RSL returned to winning ways on the final day of the regular season, but now face an uphill battle in the playoffs. The team conceded more goals than it scored during the regular season, and need to ensure goalkeeper Zac MacMath — who recorded 10 clean sheets — isn’t deserted on an island.

You don’t make it to the top without proving your worth. Supporters’ Shield winners LAFC have a strong argument with one of the league’s most glittered attacking units, and would pick up their first MLS Cup in the process. Plus, the team is the oddsmakers’ favorite to take home the damn thing.

It isn’t the playoffs without underdogs though, and a few teams could play spoiler. Montréal kept pace with Philadelphia throughout the regular season and are true contenders for the MLS Cup, while few should bet against Nashville, as long as Mukhtar continues scoring golazos. Let the games begin!