December 12, 2022
Today may mark the first-ever PWHPA All-Star event, but it’s far from the first time women’s hockey players have showcased their skills on the big stage.
Sports NewsHockey 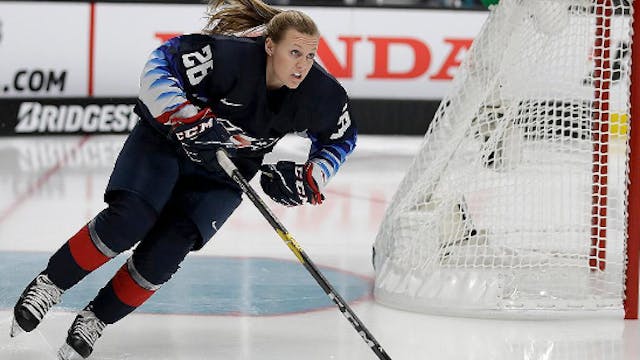 Today may mark the first-ever PWHPA All-Star event, but it’s far from the first time women’s hockey players have showcased their skills on the big stage. First thing’s first though — let’s take a trip down memory lane to learn how we got here.

Speaking of, today’s events build on a history of talent showcases for the women’s game. The CWHL hosted four All-Star games from 2014 to 2019 (with some minor facility support from the NHL), all of which aired nationally in Canada.

And the NHL’s partnership continued to help fuel public interest in women’s hockey when they invited North America’s top female talent to take part in their 2019 All-Star competition.

After three years of Dream Gap Tour showcases, the PWHPA is reclaiming their own All-Star space today at the Canadian Tire Centre (home of the NHL’s Ottawa Senators). Let the games begin.

⚙️ How it works

Before the game, though, a dynamic skills competition will take center ice. Similar to the squad selection, players (who may or may not be on an All-Star team) were nominated and chosen by their PWHPA peers to compete in one of four challenges: fastest skater, accuracy shooting, skills challenge and save streak.

Fastest skater: As mentioned, Team Adidas’ Coyne Schofield made her mark as a super-speedy knife-shoe wearer several years back, but does she still have what it takes? Canada’s Renata Fast will be Coyne Schofield’s top competition. How could she not be with a name like that?

Accuracy shooting: National team legends Hilary Knight (USA) and Sarah Nurse (Canada) are definitely known for their scoring ability, but let’s not sleep on up-and-coming American Abby Roque, one of the PWHPA’s top five scorers (as of writing) this season. With a star-studded playing field, anything could happen.

Save streak: All four tendies are solid between the pipes, but Team Harvey’s has Canadian national goalie Ann-Renée Desbiens, who’s consistently been a brick wall in high-pressure situations. An honorable mention does go out to Nicole Hensley, who’s shone bright so far this season.

Now, on to the main event. Each team will face off for six 10-minute round-robin games before the top two squads compete for the championship. Let’s meet ’em.

Team Marie-Philip Poulin: With Captain Clutch leading the way, it’s hard to imagine this lineup being anything but dominant. After all, the leading PWHPA goal scorer (as of writing) may not start sh!t, but she sure can end it, typically with a game-winner. Should be easy with the backing of fellow Team Harvey’s playmaker Sophia Shaver and the formidable Desbiens.

Team Hilary Knight: A hard-working American hero, Hilary Knight is synonymous with Team USA’s on-ice success. Joined by a mix of experienced and rising talent like Rattray and Roque and backed by fellow red, white and blue tendie Hensley, this squad is, put simply, stacked.

Team Sarah Nurse: On her own, Nursey is a consistent offensive threat, holding the records for most points and assists at a single Olympic tournament, but with the team she’s selected, Team Nurse will leave opponents quivering before the puck even drops.

In an exciting (and deserved) glow-up for the women’s best game you can name, both events will be aired globally and helmed by a kickass all-women broadcast team featuring Canadian hockey great Tessa Bonhomme and friend of The GIST Jayna Hefford.