September 23, 2022
While the MLB playoff push continues ahead of the regular season finale in early October, two sluggers are on their own historic individual quests.
Sports NewsBaseball 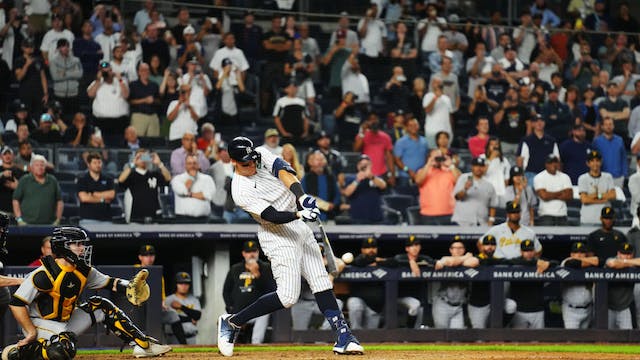 The GIST: While the MLB playoff push continues ahead of the regular season finale in early October, two sluggers are on their own historic individual quests. Time to touch ’em all.

Aaron Judge: The NY Yankees outfielder is just two home runs (HRs) away from breaking Yanks legend Roger Maris’ American League (AL) single-season record of 61 dingers, set in 1961. To put Judge’s power into context, his 60 HRs have him 20 (!!!) ahead of second place. All rise, indeed.

Albert Pujols: After a surge in production during what he’s said will be his final season, the 42-year-old St. Louis Cardinals designated hitter is two HRs away from 700 career blasts, a mark just three players have ever reached.

Zooming out: Judge’s and Pujols’ feats are made even more celebration-worthy by the fact that they aren’t tainted with an asterisk. Many consider Judge’s hunt for the AL HR title as the chase for the “real” all-time mark, given Barry Bonds, Mark McGwire and Sammy Sosa — who dominated the HR records in the late ’90s and early 2000s — are known to have used steroids.