International Day of the Girl

October 11, 2022
Today marks 10 years since the United Nations first celebrated October 11th as IDOG. While we celebrate every day, today we’re diving into what this holiday is all about, along with the benefits of (and the barriers to) sports access for girls around the world.
Sports News 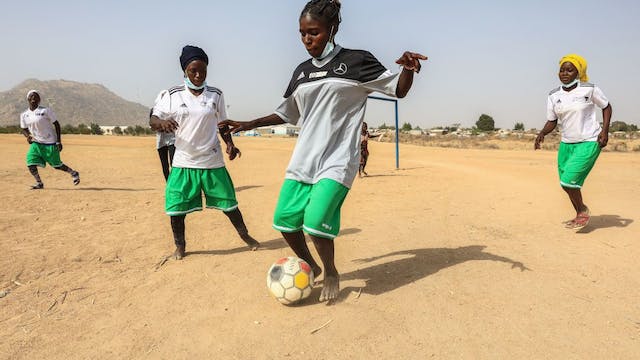 The first-ever IDOG was held on October 11th, 2012, when the United Nations (UN) declared the day to recognize the rights of and challenges faced by girls around the world. IDOG is all about addressing the unique barriers girls encounter, while empowering them to change a world that still lacks full gender equity.

And as we know, sports play a pivotal role in improving the lives of girls, with ripple effects that can benefit them well into adulthood.

While there’ve been significant strides in women’s sports recently, there’s still a long way to go to ensure girls can get in and stay in the game.

So what are those barriers? Along with having fewer opportunities, the stereotype that sports are “for boys” still infuriatingly persists. In a U.S. national survey, a third of parents said they believed that boys are inherently better at sports than girls. Absurd.

It’s hard to overstate the benefits for girls who play sports. Most obviously, sports help girls’ physical health, not just during childhood, but throughout their lives. They have stronger immune systems and less risk of developing medical issues like heart disease, osteoporosis, diabetes and a myriad of cancers later in life.

Sports also help girls develop valuable lifelong skills, such as teamwork, leadership and goal-setting abilities. They also learn how to take risks and be resilient when facing failure.

As families weigh the numerous benefits of sports participation, they also consider risks that are specific to girls. Physically, girls and women are at higher risk of certain sports injuries, such as ACL tears, stress fractures, tendonitis and concussions.

But more concerning are the risks to girls’ safety and wellbeing. Just last week, U.S. Soccer released a devastating report on verbal, emotional and sexual abuses in the NWSL. Many players who were interviewed during the year-long investigation also described troubling incidents with youth coaches.

Plus, there’s been a massive movement in the U.S. to bar trans girls from participating in sports. Trans youth are already at greater risk of depression, anxiety and suicide than their cis peers and, besides being horrifyingly discriminatory, these bans mean they miss out on the aforementioned benefits of play. Clearly, there’s still work to do.

Despite the risks and obstacles, girls are still competing and breaking down barriers.

The Tokyo Olympics were a breakout moment for girls at the Games. Not only was Team USA’s Lydia Jacoby the first Alaskan swimmer to ever qualify for the Olympics, she shocked everyone by topping the 100m breaststroke podium at just 17 years old.

Though progress is being made incrementally, there’s still a long way to go to ensure all girls have safe and inclusive access to sports.

Another big way to attract and keep girls in sports? Representation. A study found that female athletes were given just 5.4% of airtime on televised news and highlight shows in 2019 — a figure that dropped to 3.5% after taking the Women’s World Cup out of the equation. You can’t be it if you can’t see it.

Empowering more girls on fields, courts and pitches helps not just them, their families and communities, but also lifts an industry that has significant impacts on society. When we level the playing field for girls, we level it for everyone.