April 26, 2021
The GIST: Brooke Henderson is an LPGA champ once again, a whole two years after her last pro win.
Sports NewsGolf 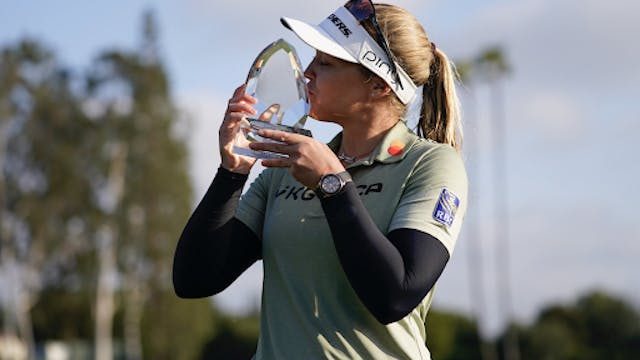 The win: Henderson won the HUGEL-AIR PREMIA LA Open on Saturday night with a tournament record 16-under par score, beating out runner-up Jessica Korda, who had the lead heading into the final round, and world No. 1 Jin Young Ko, who showered her friend with praise after the win. So cute.

The significance: With her 10th career tour victory, Henderson became the winningest Canadian — male or female — in pro golf history, and did so at the ripe age of 23. Fellow Canadian pros like Corey Conners, Mackenzie Hughes and Alena Sharp all shared their congratulations, and even the PGA TOUR had a tweet for Brooke.

The future: Henderson has decided to skip the next few tournaments taking place in Asia, including this weekend’s HSBC Women's World Championship in Singapore. Instead, she’ll practice in Florida and prepare for the next major, the U.S. Women’s Open on June 3rd. We have a feeling win #11 is just around the corner.