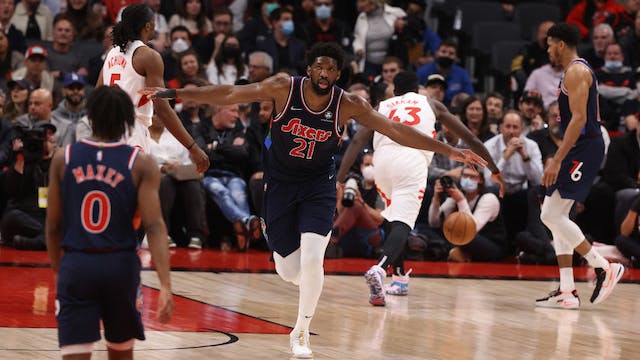 The GIST: With only one first round series still in action, the conference semifinals are just around the corner.

Who closed it out: In the Eastern Conference, after leading 3-0, the No. 4 Philadelphia 76ers avoided humiliation by defeating the No. 5 Toronto Raptors 132–97 in last night’s Game 6. Our Raps gave it their all, but MVP candidate Joel Embiid was too much to overcome. That said, we’re still proud of our dinos, and with Rookie of the Year Scottie Barnes, the future's looking real bright.

Round 2: But wait, there’s more. After the defending champion No. 3 Milwaukee Bucks eliminated the No. 6 Chicago Bulls in Wednesday’s Game 5, they’re set to take on the No. 2 Boston Celtics starting Sunday at 1 p.m. ET in what’s sure to be an epic clash of two teams playing their best basketball. Butter that popcorn.