January 18, 2023
Free agency is barely underway, but there’ve already been a couple of league-altering moves and one GOAT officially hanging ’em up after a legendary career.
Sports NewsBasketball 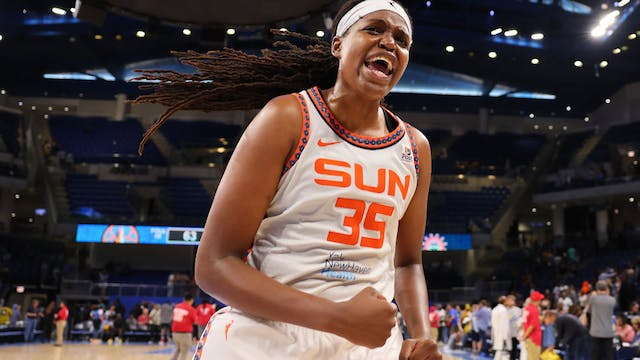 The GIST: “What offseason?” WNBA chaos, apparently. Free agency is barely underway, but there’ve already been a couple of league-altering moves in the last few days, not to mention one GOAT officially hanging ’em up after a legendary career.

The latest: The internet erupted on Sunday when 2021 MVP and four-time All-Star Jonquel Jones was traded from the Connecticut Sun to the NY Liberty in a blockbuster three-team deal, which included the Dallas Wings. In return for their franchise star, the Sun will receive the 2023 No. 6 draft pick and Rebecca Allen from NY, plus Tyasha Harris from the Wings.

The rumblings: NY is really The City That Never Sleeps — rumors are swirling that the team isn’t done. Shortly following news of Jones’ deal, free agent and 2018 WNBA MVP Breanna Stewart (who is from the state and has previously been linked to the Liberty) posted a cryptic tweet sparking further speculation about where she might sign.

The retirement: Amid the madness, four-time W champion and six-time All-Star Maya Moore officially announced her retirement on Monday. Moore memorably stepped away from the game in the prime of her career in 2018 to help overturn the prison sentence of wrongfully convicted Jonathan Irons, whom she married in 2020 following his release.