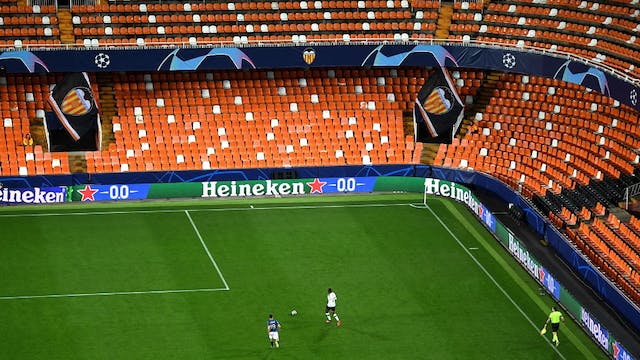 The GIST: Although we’re still in the thick of the COVID-19 pandemic, sports leagues around the world are seriously looking at options to start play again. The most popular plan? Games without spectators. Weird.

As long as I can watch from home…: Oh, for sure. We’ll just have to wait a bit longer. As Germany eases out of lockdown, their top soccer league, Bundesliga, has already begun the process to restart the season. All teams returned to practice last Monday, with players adhering to strict physical distancing guidelines as they get back in game shape. Play is set to potentially resume in mid-May.

Well, that’s great...isn’t it?: Not totally. In theory, a game without fans would cut down on tens of thousands of people gathering in one spot, which is good. On the other hand, as English professional football club West Ham CEO, Karren Brady, pointed out this weekend, it’s still a dangerous option. She estimates between 300 and 500 people would need to be present for a single soccer match, including security, facilities staff, media, players and team staff.

Ah, makes sense. Is it just soccer?: Nope. Tennis, too. Serena Williams’ coach Patrick Mouratoglou is starting Ultimate Tennis Showdown, an independent league where players will face off in a controlled environment (i.e., no fans) at his tennis academy in France. And tennis star Rafael Nadal is also getting in on the fun, inviting fellow pros to his academy in Spain to train for the upcoming season and compete against each other for practice (and our television viewing enjoyment!).

And what’s happening here in North America?: Money’s a bit tight over here. The NBA and NBPA (the National Basketball Players Association) came to an agreement to reduce players’ twice-monthly paychecks by 25% starting May 15th, with the funds being held until a decision about the season is made.