August 25, 2022
The puck drops on the International Ice Hockey Federation’s (IIHF) Women’s World Championships tonight, so we’re sliding into your inbox with a special edition newsletter featuring a full breakdown of the tourney, the top three teams to know and the players to watch before the games begin.
Sports NewsHockey 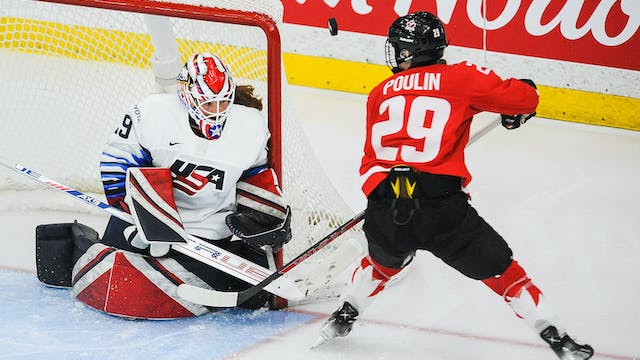 Because of this little thing called a pandemic, for the first time ever, the Women’s World Championships are taking place in the same year as the Olympics.

In terms of the setup, typically, the world’s top 10 teams — ranked by the IIHF based on prior World Championship and Olympic performances — are split by skill into two groups of five (the top five teams in group A and the bottom five squads in group B) for the initial round-robin competition. With Russia banned this year, 11th-ranked Hungary is participating in the tourney.

A key difference between the round robin and knockout stage? If a game is tied after three periods of regulation play, the game moves to three-on-three sudden death overtime (OT).

With the format in mind, let’s take a look at the groups. Group A may be stacked with top talent, but with Group B teams facing potential elimination after the round robin, there will be drama to spare.

Group A: In ranking order, Canada, the U.S., Finland, Switzerland and, for the first time ever, Japan fill out the top tier. The round-robin battle of North America will likely be a sneak peek of the gold medal game. That said, keep an eye out for potential upsets by Finland or even Switzerland — no win is guaranteed.

Group B: Continuing down the list, Czechia, Sweden, Germany, host-country Denmark and Hungary round out the second tier of competition. After making their first Olympic appearance in February, the Czechs have the most momentum, but don’t sleep on a home team success story.

Now we know the big picture, let’s narrow in on the top three contenders…

It feels like just yesterday that forward Blayre Turnbull rolled her stretcher onto the ice for the gold medal celly after defeating Team USA 3–2 in OT at last year’s final. Now she’ll attempt to help the red and white secure a second straight title for the first time since 2001.

Players to watch: You can’t talk about Canadian hockey without discussing the aforementioned Poulin. She’s netted three Olympic golden goals, along with last summer’s World Championship winner, and has no intention of slowing down. A hard-working player on and off the ice, the 31-year-old is aging like the finest of wines.

Keys to success: Canada has won World Championship and Olympic golds in the past year, but now the team needs to adapt to the Natalie Spooner–sized hole in the locker room, as the beloved forward enjoys her maternity leave.

Game 1: The squad will start their tournament against last year’s bronze medalist, Finland, today at 1 p.m. ET. Elimination may not be on the line, but seeding certainly is. Let’s go, girls.

🦅 Team USA: The runners up

After five straight years of World Championship golds, the script was flipped last summer when the Americans fell to Canada in the Worlds, the Olympics and the Rivalry Series.

Players to watch: Hilary Knight has been the heart and soul of Team USA for as long as we can remember: this year marks the forward’s 12th Women’s Worlds appearance, good enough for a team record. She has dangles for days and never seems to struggle against a Canadian defense. Every team needs a knight in sweaty armor.

Keys to success: The squad will need to find a way to compensate for a Brianna Decker–less lineup, as her (potentially) Olympic tournament–altering injury still leaves her sidelined.

Game 1: The squad should be able to ease into round-robin play with a solid win over No. 5 Japan bright and early today at 9 a.m. ET.

Finland’s World Championship story can be summed up as, “Always the consolation game, never the final.” But the team may be ready to build off their controversial 2019 near-success and leapfrog their way to the elusive gold medal.

Players to watch: The Lady Lions have a strong netminder in Anni Keisala, a necessary strength to stand a chance in this year’s Group A competition. She boasted a stellar .949 save percentage in last year’s tournament and should be a reliable presence between the pipes.

Keys to success: For Finland, this year will only be considered a success if they move beyond the bronze, which likely means usurping either Canada or the U.S. They’ve done it before, but they’ll need to be quick to the puck and consistently firing on all cylinders to get the job done.

Game 1: As mentioned, the Lions will have their chance to do so right off the bat as they face Canada today at 1 p.m. ET.

With women’s professional hockey still in a state of flux — the PWHPA’s upcoming league’s been postponed, the Dream Gap Tour’s TV broadcast is up in the air and Canada’s suffered a recent loss of funding — this tournament will provide the much-needed coverage these athletes deserve.