A storybook ending to the World Cup Final

December 19, 2022
The legendary Lionel Messi and No. 3 Argentina are your 2022 FIFA men’s World Cup champions after taking down Golden Boot winner Kylian Mbappé and No. 4 France yesterday in perhaps the greatest sporting event ever.
Sports NewsSoccer 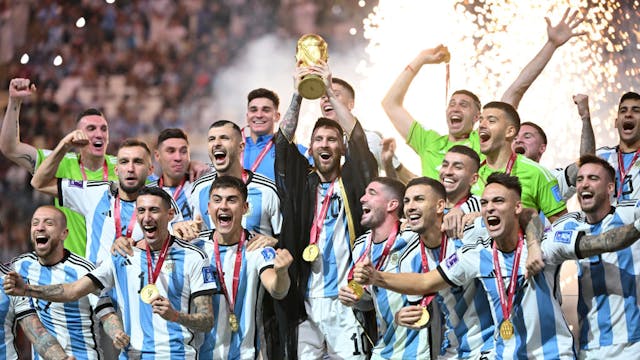 The GIST: The legendary Lionel Messi and No. 3 Argentina are your 2022 FIFA men’s World Cup champions after taking down Golden Boot winner Kylian Mbappé and No. 4 France yesterday in perhaps the greatest sporting event ever. Couldn’t have written a better ending.

How it happened: With a 2–0 lead and less than 11 minutes to go in regulation, it seemed as if Argentina would sail to the title. But Mbappé took matters into his own feet, er, hands, scoring twice in under two minutes to send things to extra time.

The significance: Yesterday marked Messi’s record-setting 26th and final men’s World Cup appearance, and he celebrated by nabbing the trophy that eluded him in his four previous tournaments. He also won the Golden Ball (aka tourney MVP), becoming the first man to do so twice. Consider that GOAT “debate” settled.

Off the field recap: As thrilling as yesterday’s action was, the confetti and fireworks can’t cover up Qatar’s atrocious human rights abuses in the lead up to and throughout the tournament. From quelling player protests to ignoring the deaths of migrant workers, Qatar and FIFA need to pay up and do better.

What’s next: FIFA will have a chance to do just that when the women’s World Cup kicks off from Australia and New Zealand in just 213 days. Not like we’re counting…