January 25, 2023
Here are this week’s kings, queens and court jesters from the House of NCAA. Winter is here.
College SportsBasketball 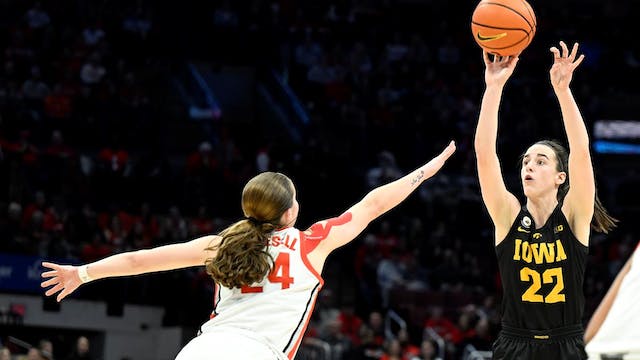 The GIST: The aforementioned Angel Reese isn’t the only royalty who’s been breathing fire. Here are this week’s kings, queens and court jesters from the House of NCAA. Winter is here.

Poll positions: Despite very little drama on the court, the women’s poll managed to make history this week. In the AP poll’s 836-week run (that’s 47 years!), this is the first without a single team from Texas. From yeehaw to yeenaw.​​

Rapid rebounders: Causing the most ruckus in the Top 25 royal court? The teams just outside of it. The USC gals are making waves due to their recent victory over No. 3 Stanford, but the comeback queens of Tennessee are about to burst the “best of” bubble. After an early-season implosion, the preseason–No. 5 Lady Vols now boast a nine-game win streak.

Underdogs on top: No sooner had the polls landed than the knights of upset rode in, bringing history to Monday night’s duels. No. 10 Iowa guard Caitlin Clark led the Big Ten charge, posting her eighth (!!!) career triple-double as the Hawkeyes handed No. 2 Ohio State their season’s first defeat 83–72. With the L, only No. 1 South Carolina and No. 4 LSU remain undefeated in all of Division I (DI) hoops.

What to watch: For the fellas, see whose armor is toughest when the No. 13 Xavier Musketeers battle No. 19 UConn tonight at 6:30 p.m. ET on FS1. Then tomorrow, cozy up to catch not only the women of No. 2 Ohio State, who’ll aim for redemption against No. 6 Indiana at 8:30 p.m. ET on BTN, but a slew of ranked women’s games. Move over Red Wedding, the ranked will fall tomorrow.