February 17, 2022
The GIST: While Canada’s men’s hockey team was eliminated yesterday, the women are 2022 Olympic gold medalists. So nice, we had to write it twice.
Sports NewsHockeyOlympic Sports 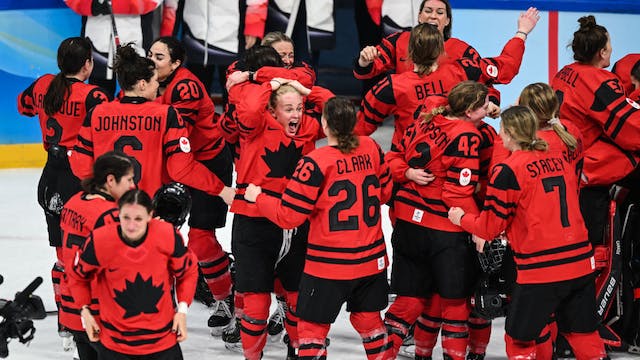 The GIST: While Canada’s men’s hockey team was eliminated yesterday, the women are 2022 Olympic gold medalists. So nice, we had to write it twice.

The game: Coming in hot, Canada was up 3–0 by the beginning of the second period, thanks to Sarah Nurse (the new Olympic single-tournament all-time points leader) and a pair of back-to-back goals from captain clutch, Marie-Philip Poulin — the first hockey player (male or female) to score in four Olympic gold medal games. Because of course.

How Canada got here: This retribution has been four years in the making. Following a heartbreaking shootout loss to Team USA at the PyeongChang Games, this team added 10 first-time Olympians, creating a stacked combination of young talent and veteran leadership — perhaps the best team Canada has ever had.

What’s next: Now that Canada’s reclaimed their rightful spot atop the Olympic podium, we’re already counting down the days until August’s Women’s Ice Hockey World Championships.