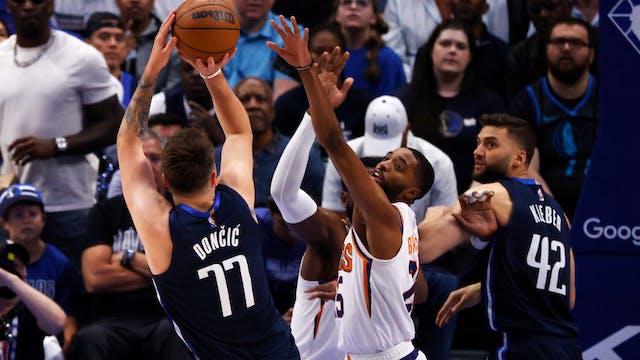 The GIST: One down, three to go. The first conference final ticket has been punched, with the remaining three on the line this weekend — buckle up.

Who’s through: The Eastern Conference’s No. 1 Miami Heat. They’re the first squad to advance after eliminating the No. 4 Philadelphia 76ers with a 99–90 win last night. The Sixers rallied in Games 3 and 4 to make it a series, but Jimmy Butler’s 32 points last night and Miami’s stifling defense proved too hot to handle.

Who’s going to Game 7: The Western Conference’s No. 1 Phoenix Suns and No. 4 Dallas Mavericks, thanks to Dallas’ clutch 113–86 victory last night. This back-and-forth series comes down to Sunday’s Game 7 — the two most beautiful words in sports. See you in the desert.

Who could clinch next: After a jaw-dropping Game 5 comeback win over the East’s No. 2 Boston Celtics on Wednesday, the No. 3 Milwaukee Bucks will look to advance after tonight’s 7:30 p.m. ET home Game 6. Both teams have traded road victories throughout the series though, so this physical battle seems poised to go all seven games. Yes, please.