December 09, 2022
The World Cup quarter-finals kick off in just a few short hours, and with all eight remaining teams in the top 25 of FIFA’s rankings, the Cup is anyone’s for the taking.
Sports NewsSoccer 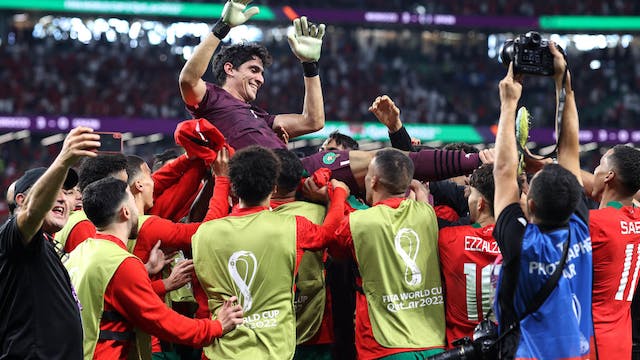 The GIST: The last few days without nonstop soccer have been tough, but don’t fret — the World Cup quarter-finals kick off in just a few short hours. And with all eight remaining teams in the top 25 of FIFA’s rankings, the Cup is anyone’s for the taking.

No. 12 Croatia vs. No. 1 Brazil — Today at 10 a.m. ET: It’s 2018 runners-up Croatia against perennial favorite Brazil. The Checkered Ones squeaked into the quarters after beating No. 24 Japan in penalty kicks. Meanwhile, Brazil has samba'd their way into the world’s hearts with their smooth style and flashy goals, meaning Croatia will need some serious defense to stop their high-powered attack.

No. 8 Netherlands vs. No. 3 Argentina — Today at 2 p.m. ET: If you needed an excuse to log off early today, this is it. Lionel Messi–led Argentina is favored, but the Netherlands’ stout defense could throw a wrench in the GOAT’s (likely) final World Cup pursuit.

No. 22 Morocco vs. No. 9 Portugal — Tomorrow at 10 a.m. ET: Will previously-benched superstar Cristiano Ronaldo start with the stakes this high? That’s up to Portugal coach Fernando Santos, who may be tempted to opt for Ronaldo’s replacement, Gonçalo Ramos, after the 21-year-old posted a sweet hat trick to help book a spot in the quarters.

No. 5 England vs. No. 4 France — Tomorrow at 2 p.m. ET: The tourney saved perhaps the best for last with this Top 5 showdown. The Three Lions have three clean sheets in their pocket, but Les Bleus have Kylian Mbappé and his five goals in four games. Star, meet power.