Sports and the invasion of Ukraine

February 25, 2022
The GIST: The unprovoked Russian invasion of Ukraine is sending shockwaves across the globe, and the sports world certainly isn’t exempt.
Sports News 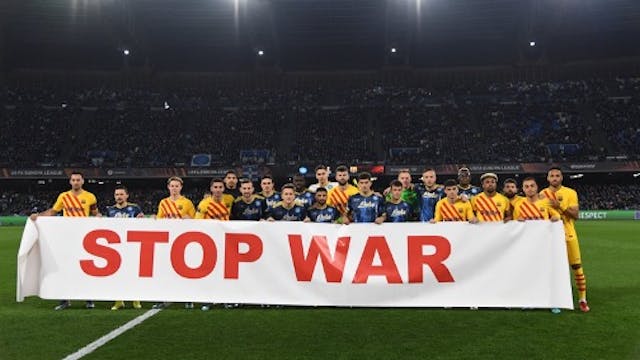 The GIST: The unprovoked Russian invasion of Ukraine is sending shockwaves across the globe, and the sports world certainly isn’t exempt.

The response: The reaction was widespread across the global game of soccer. Barcelona and Napoli men’s players displayed a “Stop War” banner before yesterday’s Europa League match, German club Schalke removed the logo of a state-owned Russian energy company from their jerseys and UEFA is expected to move the men’s Champions League final out of St. Petersburg.

On the ground: WNBA players who were playing in Ukraine are no longer in the country, but players in Russia — including Dallas Wings star Arike Ogunbowale (pronounced ah-REE-kay oh-goon-bow-WAH-lay) — are still overseas and enduring this horrific reality.

The bigger picture: Sports are often seen as a unifying force and an opportunity to escape from the world. But, as we’ve said time and time again, they’re also inherently political.