July 27, 2020
Baseball and basketball regular seasons began this weekend, and while the season starts were fun to watch, it was the leagues’ calls for social justice that really blew us away.
Sports NewsBasketballBaseball 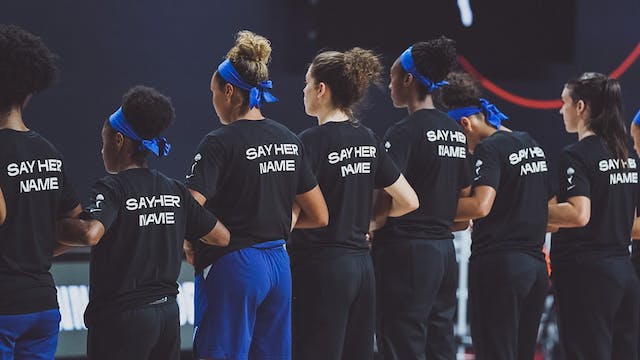 The GIST: Baseball and basketball regular seasons began this weekend, and while the season starts were fun to watch, it was the leagues’ calls for social justice that really blew us away.

What happened?: The MLB had been relatively quiet during the recent Black Lives Matter protests, but support for the movement was abundant this weekend. “BLM” has been stamped into pitchers' mounds, players can choose to wear a “Black Lives Matter” patch on their jerseys and many players knelt before games after messages of unity played on the loudspeaker. Unprecedented, and long overdue.

Awesome. Any other MLB news?: Elsewhere in the league, the Miami Marlins had to find a new pitcher for yesterday’s game against the Philadelphia Phillies, after starter Jose Urena was one of four players to test positive for COVID-19. They still won 11–6.

And in basketball?: The WNBA season started Saturday, and ahead of the opening matchup between the Seattle Storm and the New York Liberty, all players returned to their locker rooms for the anthem. Upon returning, the players stood for 26 seconds of silence in honor of Breonna Taylor, who was killed at age 26.

Love it. And how were the games?: Most notably, Seattle won the season-opener 87–71 over the Liberty, which wasn’t a shock based on last season’s standings. And unsurprisingly, superstar Stewart led the Storm with 18 points while veteran point guard Clarendon led the Liberty with 20 points. What was surprising, though, was rookie Sabrina Ionescu’s (pronounced YOH-NESS-COO) relatively quiet Liberty debut.