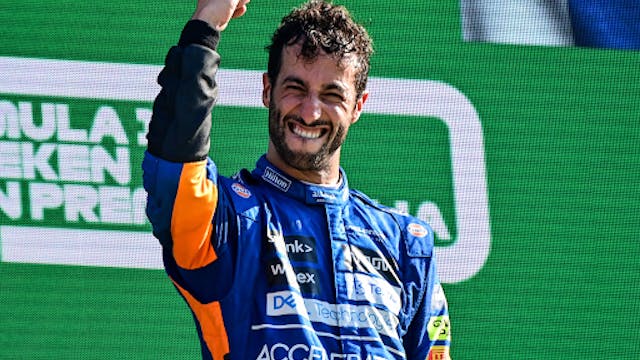 🏎F1: Yesterday’s Italian Grand Prix (GP) was a trip. The Lewis Hamilton–Max Verstappen rivalry finally came to a head yesterday when Verstappen caused a crash that took them both out of the race (don’t worry, he was penalized), before Drive to Survive sweetheart Daniel Ricciardo won his first GP since 2018 and celebrated with a traditional Aussie shoey. Crikey.

⚾️Baseball: Unfortunately there’s no mercy rule in the MLB. If there was, the Baltimore Orioles wouldn’t have been subjected to a 22–7 loss to the Toronto Blue Jays yesterday, which included a home run from Vladimir Guerrero Jr. that tied him with LA Angel superstar Shohei Ohtani as the league leader. O-K! *O-K!* Blue Jays!

🏀WNBA: The Seattle Storm will have to finish the regular season (all seven days of it) without their best player. Breanna Stewart suffered a foot injury last week and will be reassessed prior to the playoffs (which are set to begin on September 23rd). Rest up, champ!