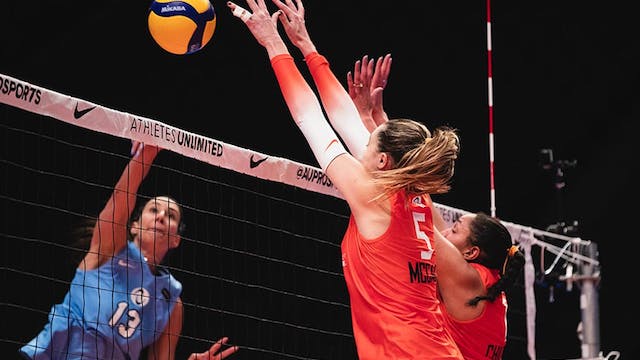 The GIST: Athletes Unlimited (AU) served up not one, but two exciting volleyball announcements yesterday. The multisport organization inked ESPN as a broadcast partner for the 2023 season, which follows AU’s first-of-a-kind cross-country exhibition tour against the NCAA’s top volleyball teams.

The media deal: ESPN+ will stream all 30 matches of next fall’s AU volleyball championship, a move from its usual spring slot. The shift means pro and collegiate volleyball will air on ESPN’s platforms during the same time period next year.

The tour: Players on AU’s roster will travel to eight volleyball-crazed college campuses in March and April for the AU Volleyball Exhibition Tour, as well as two youth tournaments for intrasquad matchups. Athletes will also take part in community events to drive awareness for the upcoming fall season.

The context: The tour is a brand-new offering from AU, which normally hosts five-week seasons at a single site for all of its sports. Their original format is, in part, designed for the “fluid fan” — a casual who engages with sports while riding the momentum of short-and-sweet tournaments.

Zooming out: AU and ESPN are likely exploring if the NCAA women’s volleyball’s boom can be leveraged to drive fandom for the underdeveloped and less popular U.S. professional scene.