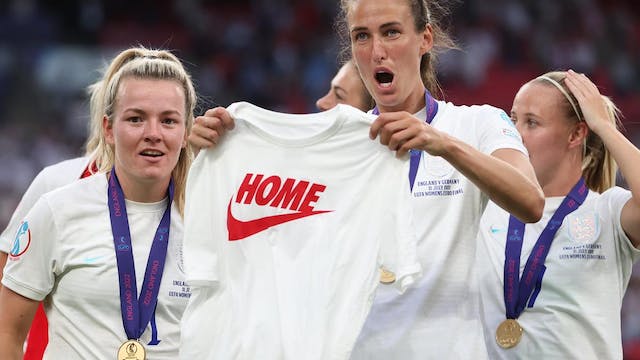 The details: Fanatics also scored by being an official apparel partner of England’s Euro-winning team. The Lionesses’ merch purchases skyrocketed 640% in the four hours following England’s 2–1 win over Germany, netting more sales than during the entire week leading up to the final. Shop ’til you drop.

The context: Global sales of Fanatics’ women’s sports merch increased by 28% last year, reflecting the industry’s growth. The overall women’s sports apparel market was valued at $26.8 billion in 2018, and businesses like Dick’s Sporting Goods and Nike took notice. Companies have been increasing women’s team inventory to meet the rising demand.

Zooming out: There’s plenty of opportunity in the apparel space — the women’s sportswear industry is rising just as steadily as women’s sports, and leaders have already marked womenswear as their next major growth venture.