January 18, 2023
The governing body struck a four-year, Spanish-language multimedia rights deal with Telemundo to make all USWNT and USMNT matches available domestically in English and Spanish for the first time.
Sports BizSoccer 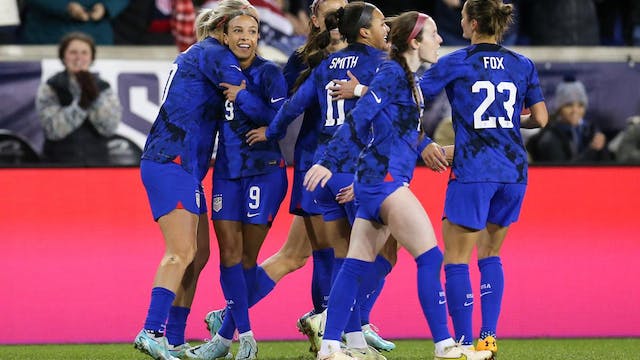 The GIST: The U.S. Soccer Federation (USSF) is scoring more screen time than ever. Yesterday, the governing body struck a four-year, Spanish-language multimedia rights deal with Telemundo to make all USWNT and USMNT matches available domestically in English and Spanish for the first time.

The details: Telemundo will show national team friendlies, the SheBelieves Cup and other key games across linear and digital platforms, including NBC’s Peacock. The broadcaster also plans to create original content and ancillary programming around special events, including this year’s Women’s World Cup and the 2024 Paris Olympic Games.

The context: This is the first Spanish-language contract negotiated by the USSF since cutting ties with Soccer United Marketing and moving deal-making efforts in-house. USSF CCO David Wright describes the body’s strategy as a four-legged “media stool,” with the Telemundo agreement serving as the second leg.

Zooming out: There’s no better time than a women’s World Cup year to improve USWNT coverage and doing so in Spanish increases accessibility for a fervent soccer fanbase of native speakers (and those who prefer to opt out of Fox’s English-language broadcasts).