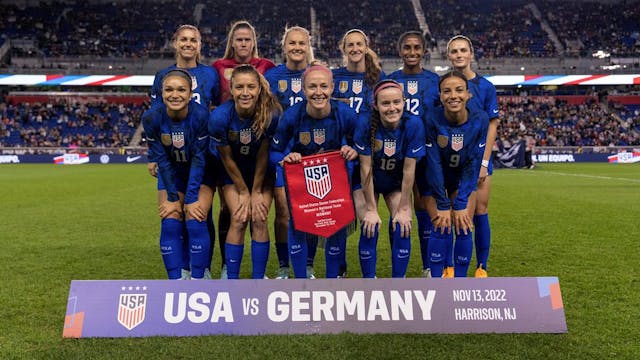 The GIST: While the men’s FIFA World Cup takes center stage, Warner Bros. Discovery Sports (WBD Sports) is hyping up the USWNT. Chairman and CEO Luis Silberwasser called the chance to air women’s soccer “a big deal for us as a company” on Thursday, a month before its deal with the U.S. Soccer Federation (USSF) begins.

The details: WBD Sports’ USSF slate kicks off January 17th with the USWNT’s friendly with New Zealand, airing on HBO Max at 10 p.m. ET. The media company acquired the English-language rights from ESPN and Fox in March in a deal reportedly worth around $25 million annually, and plans to air matches across its streaming and linear arms.

The why: Silberwasser identified both soccer and women’s sports as avenues for growth, noting that the USWNT matches are already changing WBD Sports’ business practices. It’s “a big deal…for the way we engage with clients and advertisers [to show] that we are behind the growth of women’s sports,” he said.

The strategy: Picking up the USSF’s rights is part of the company’s intentional strategy to acquire “premium sports” packages. “I’d rather do a few things, but do them really, really well,” Silberwasser said, recognizing that WBD Sports can afford to do so because it doesn’t operate a traditional sports network.

Zooming out: The company’s focus on cultural relevance in sports mirrors its entertainment output, which includes recent hits House of the Dragon and Euphoria, so landing the popular and influential USWNT feels apt. The team’s broad appeal also allowed the USMNT and the USSF as a whole to score a buzzy new deal. Champions on and off the pitch.