🎿 Freestyle skiing: Canada was seeing double in last night’s women’s freeski halfpipe final, with defending Olympic champion Cassie Sharpe and Rachael Karker claiming silver and bronze, respectively, behind none other than 18-year-old phenom Eileen Gu, who nabbed her third medal of the Games.

🥌 Curling: Adding some hardware to his gold medal from the 2006 (!!!) Turin Olympics, the skip from St. John’s, Newfoundland, knocked out Team USA 8–5 for the bronze early this morning. Truly the best ever.

💨 Speed skating: After missing the men’s 500m podium by just 0.03 seconds, Quebec’s Laurent Dubreuil glided to his first Olympic medal, a silver in the 1,000m this morning. Don’t sleep on this “sk8er boi.”

⛸ Figure skating: Though this morning’s pairs short program was, ahem, not great for both Kirsten Moore-Towers & Michael Marinaro and Vanessa James & Eric Radford, both teams have advanced to tomorrow’s 6 a.m. ET free program where they’ll have a chance to pick up their scores. 💨 Speed skating: Canada claimed a dramatic gold medal win in the men’s 5,000m relay this morning. A tight race throughout, Steven Dubois brought it home, winning each shade of medal in Beijing.

🥌 Curling: Team Jennifer Jones was dealt a critical blow this morning after being upset 11–9 by China in extra ends. Sigh. Has anyone checked on CanWNT gold medalist and curling diehard Steph Labbé?

🏒 Men’s hockey: Canada is currently battling Sweden in the quarter-finals on CBC. They’ve only got one shot to advance to the semis, so “vomit on your mom’s spaghetti, or whatever that talking singer says.” 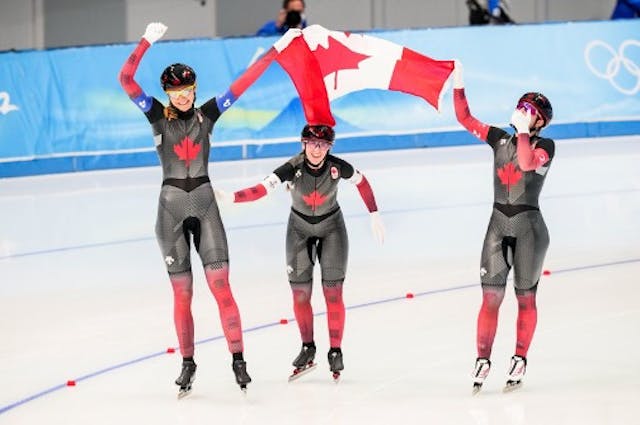 💨 Speed skating: Team Canada is on top of the world (hey!) after winning gold in the women’s team pursuit early this morning, setting an Olympic record (2:53.44) along the way. Coming off a perfect 2021–22 World Cup season, the trio was able to hold on when it mattered most.

🏂 Snowboard: Max Parrot returned to the podium with a bronze in men’s big air this morning. Following his controversial gold in slopestyle — a missed grab that led teammate Mark McMorris to claim he should’ve won — his talent has been defended. And, in true Canadian fashion, McMorris said sorry.

⛸🏒 Ice qualifiers: Coming off an impressive fourth-place performance in the team competition, figure skater Madeline Schizas scored a 60.53 in her women’s short program this morning to advance to Thursday’s free skate.